WHAT’S ONE OF THE SIMPLEST THINGS YOU CAN DO TO LIVE LONGER?

Usually, it’s one of the simplest things you can do to help yourself for prolonging your life”. Janet was a bit startled by the sudden exclamation of her doctor. They sat facing each other in the exam room. “I’m talking about blood pressure, Janet!”

WHAT DID JANET’S DOCTOR SAY TO HER ABOUT BLOOD PRESSURE?

They had been exchanging small talk when Janet casually asked the doctor what she could do to be healthy. Being in her 40’s, Janet didn’t think of herself as being unhealthy. Still, she wanted to be proactive. Doc Wilson kept talking. “You know, Janet, it’s such a simple thing, if people would just check their blood pressure from time to time.

Doc Wilson was on a roll now, “Medicine has made huge advances in the treatment of hypertension. Even the rich and famous were not spared. I was just reading that one of President Franklin Roosevelt’s doctor wrote”.

“I have often wondered what turn the course of history might have taken if the modern methods for the control of hypertension had been available”.

“The thing is that you can have high blood pressure and still feel pretty good. High Blood Pressure is often silent. Ok, sometimes you may have a headache or slight dizziness but very often you feel nothing unusual”. So why do people have high blood pressure?  “That’s a pretty good question, and amazingly there are a lot of cases, we just don’t know. Oh, sure we know sometimes, but a lot of the time we don’t. Still that’s not the same as not being able to treat it. Most people can get their blood pressure under control with medicine and some other things like weight loss but they can’t get it under control if they don’t even know they have it.”

HOW MANY PEOPLE HAVE HIGH BLOOD PRESSURE? 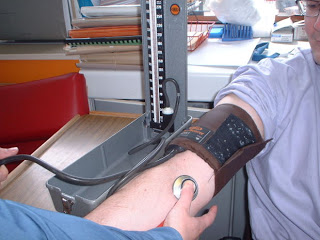 The pressure is created by the heart but the arteries and channels that carry the blood also exert pressure. An analogy is the way fuel flows in a car. In a car, the fuel is pumped from the fuel pump. When you put your foot on the accelerator more fuel is pumped to meet demand. When you exercise your heart pumps harder to meet demand. The fuel flows through pipes to the parts of the engine.

If the pipes get clogged it is harder for the fuel to be distributed, similarly, resistance in the arteries can force the blood pressure up. If there is a leak in the system the pressure can drop. If you lose a lot of blood the pressure drops and you can go into shock.

Even though we don’t know why most people have high blood pressure (some people do have identifiable factors like kidney problems) we do know many things that affect the pressure. If you are angry, angry at the traffic, angry at your boss and pretty much just plain always angry there’s a good chance it’s showing up in your pressure. Adrenalin gets pumped into your system, the nerves are stimulated. The nerves attached to the artery walls can alter the blood pressure. Anger and stress, especially chronic (long term) anger and stress are correlated with high blood pressure and heart problems.

“Nearly all people that have blood pressures consistently above 140/90, now called the high end of normal, have some treatment prescribed and yet up to half of the patients still have elevated pressures. Why? Because doctors are not aggressive and creative in treating the problem…

Many patients do not follow doctor’s orders and fail to fill prescriptions or neglect to take medicine daily; then the rising weight of Americans, the passion for high-salt processed and restaurant-prepared foods have raised the once-normal pressures of many people to levels that should be treated”.

Weight loss and improvements in diet and exercise habits can indeed help people lower an elevated pressure, but most people can’t adjust their lifestyles enough to normalize their blood pressure. Many people need help from medication and often it’s a combination of medicines.