It would certainly be a wonder drug if it was discovered today. Nevertheless, aspirin is still in the headlines almost every week as the results of one study or another seem to shed light on yet another remarkable property of aspirin. Controversy swirls around aspirin with some doctors swearing by aspirin and others swearing at it. 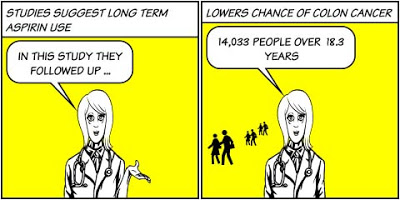 HEART ATTACK PREVENTION BUT CANCER TOO?

Probably the most well-documented benefit of aspirin is a probable effect to lower the chance of heart attack. Sure aspirin isn’t for everybody, say people with ulcers, bleeding problems and some people with asthma for example. Yet, it seems the studies of aspirin benefits just keep rolling in.

Basically, the authors looked at four trials in the 1980s and 1990s with cardiovascular (heart-related) outcomes. Even though the studies were about the effect on the heart, the authors looked to see whether the participants in the study had died of colon cancer. There were made four aspirin trials – British Doctors Aspirin Trial, Thrombosis Prevention Trial in primary and secondary prevention- UK-TIA Aspirin Trial,  Swedish Aspirin Low Dose Trial and one additional trial Dutch TIA Aspirin Trial.

WHAT DID THE STUDY SAY?

What the heck are they talking about? Well, what they are saying is they looked at 14,033 people in control or intervention groups. They found that aspirin given at any dosage for an average of 5.8 years lowered the long term colon cancer risk. They suggested the strongest benefit might be in an area that is hard to reach by common diagnosis methods such as colonoscopy. 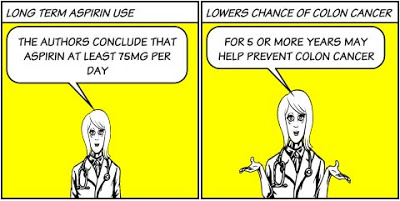 Several reports have alluded to cancer reduction by aspirin such as a previous study by Harvard scientists.